What alphabet is used for the Welsh language?

The Roman alphabet is used to represent Welsh, with some differences compared with how it is used in English. There are 29 symbols in the Welsh alphabet. These are, in order:

Some of the symbols contain two letters, but represent single sounds in Welsh: have a look at ch, ff, ng, ll, ph, and th. This means that if you were filling in a Welsh-language crossword where the answer was 'llawchwithedd' ('left-handedness') then you would be filling in only 9 squares: 'Ll-A-W-Ch-W-I-Th-E-Dd'. There is no letter k, q, x, or z in Welsh (althogh you might see these in words that come from other languages). In Welsh, the vowels are a, e, i, o, u, w, and y (yes, 7 of them!), although i and w sometimes operate as consonants as well!

What are some tips on pronouncing Welsh words?

Like with any language, Welsh has its own special peculiarities- and joys- in terms of how it is pronounced! Here are some general tips on how to pronounce Welsh words. Of course the best way to get it right is to listen to native speakers and copy the way they do it. These days there's plenty available on TV and radio- and YouTube!

One very helpful feature of the language is that Welsh spelling is highly regular, and the pronunciation generally follows the spelling phonetically very closely, once you know the basic rules. Words of more than one syllable are usually stressed on the last-but-one syllable. Most of the consonant sounds are very similar to the corresponding ones in English. Note, though, that c is always hard as in English 'cat', f is pronounced as 'v' in English 'van', g is always 'hard', as in English 'get', r is a strong, 'rolled' or 'trilled' sound, and s is always like 's' in English 'sad'. When w is next to a vowel in Welsh (a, e, i, o, u, or y), it acts like a consonant, and sounds just like 'w' in English 'way'.

The vowel-combos 'ew, iw, uw' are unique to Welsh, and are formed by running the first Welsh sound into the second one. The Welsh sound 'wy' is unique too, and sounds a bit like if you were to run together the sounds 'oo+ee' in English. The Welsh 'yw' in the final syllable of a word is like Welsh 'iw, uw', and otherwise sounds rather like running together the sounds 'uh+w' would do in English.

Yes, the Welsh language is spoken throughout Wales today, and Wales is officially a bilingual country. The language has been spoken continuously in Wales throughout recorded history, but had become a minority language, spoken by only about 40% of the population, by early in the 20th Century. Nevertheless, the language is spoken by a majority of the population in parts of the north and west of Wales today (the Welsh Heartland or Y Fro Gymraeg), but by many fewer people in other areas in the south and east. In the 2011 Census, there were about 560,000 residents (19%), over age three, proficient in at least speaking the Welsh language. The detailed results were:

However, according to the Welsh Language Use Survey (2013 – 2015), 24% per cent of residents aged three and over were able to speak Welsh. In 2015, the Welsh Assembly launched Cymraeg 2050: A million Welsh speakers, a campaign to get a million people using Welsh in their everyday lives by the middle of the 21st century. The Foreword to this ambitious project summarises its aims as follows: "By raising our expectations and adopting an ambitious vision we have the potential to change the future outlook for the language. Together, we can enable the Welsh language to grow, and create a truly bilingual Wales with a living language for all."

Parallel.cymru: The history and development of the Welsh language

What are the Welsh words for 'Wales' and 'Welsh'?

In modern Welsh, the name for Wales is Cymru, and the word for Welsh people is Cymry (both of these are pronounced the same, COME-ree). One Welshman is Cymro,  a Welshwoman is Cymraes, and The Welsh is y Cymry (COME-roe, come-RICE, and uh COME-ree). In a similar way, the Welsh language is Cymraeg (pronounced come-RAAG). These words all come from Brythonic, the ancestor of modern Welsh, where the words combrogos meant fellow-countryman (and combrogi meant fellow-countrymen). So, Cymry and Cymru convey convey fraternal ideas like fellow-countrymen and land of fellow-countrymen. Welsh-speaking people in the area of modern Wales, and also in northern England and southern Scotland, were probably describing themselves as Cymry before the 7th century.

Parallel.cymru: Rebecca Thomas of Cambridge University: How the people of Wales became Welsh

Where does the modern English words 'Wales' and 'Welsh' come from?

The modern English words Wales and Welsh derive from the same Germanic root. The Romans in the time of Julius Caesar identified one of the peoples living in the region of Gaul the 'Volcae', and this name came to be the general term for all non-Germanic peoples. Then, speakers of Germanic languages themselves began to use a word based on this name to refer to first to all Celts, and later to all Romans, and in Old High German this became 'walh' (singular), and 'walha' (plural). When the Angles and Saxons came to Britain and wanted to refer to any native Britons, they called the people 'Wælisc', and their lands 'Wēalas'. However, these words were not limited to the area covered by the modern country of Wales today, or to people who we would now identify as speaking the Welsh language. Instead, as we can see from the names, they also included areas such as Cornwall (in south-west England), and Walworth and Walton (in north-east England). The Anglo-Saxon (or Old English) words 'Wælisc' and 'Wēalas' changed over time to become 'Welsh' and 'Wales' in modern English.

How do you say 'Wales forever' in Welsh?

The phrase literally meaning 'Wales forever' is Cymru am byth in Welsh. It is pronounced 'CUM-ree am BITH'. The Welsh phrase could also be rendered in English as 'Long live Wales', and is often cited as the 'motto of Wales'. In this sense it can be distinguished from the motto 'Ich dien' ('I serve'), which accompanies the Prince of Wales' heraldic badge, the Prince of Wales' Feathers (three white ostrich feathers emerging from a gold coronet). The Feathers are sometimes used to symbolise Wales, for example in Welsh rugby union, and by Welsh army regiments.

What are some basic Welsh greetings? 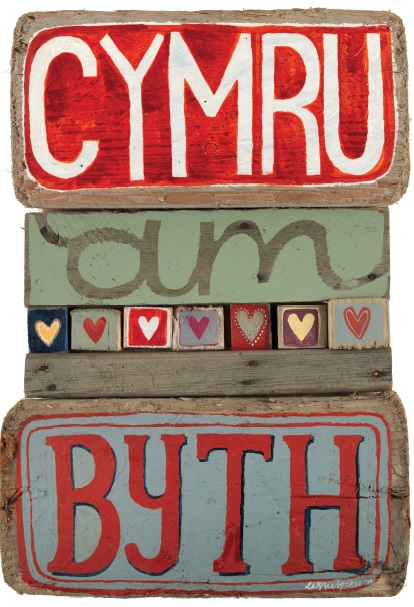 What is the name of THAT Welsh town with a very long name?

The small town on the Island of Anglesey (Ynys Môn in Welsh) off the northwest coast of North Wales, famous for having the longest place-name in the United Kingdom, and in any English-speaking country is:

It is also holds the record as Europe’s longest place-name, and is the second-longest one-word place-name in the world. The name is reported to have been invented in the 1860s for publicity purposes, based on a previous (not quite so lengthy) name. You have to remember that because of the way Welsh is spelled, the name contains 51 symbols from the Welsh alphabet, since ll, ng, and ch represent single sounds. The meaning can be broken down as follows:

The 2011 United Kingdom Census showed that Llanfair PG had a population of 3,107, of whom 71% were able to speak Welsh. 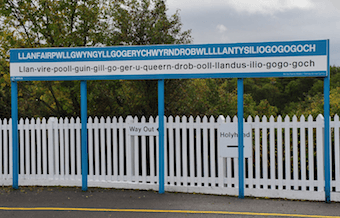 What are some useful Welsh phrases?

What are some fun Welsh words and phrases?

These three little words are different forms of the definite article in Welsh ('the' in English). There is no indefinite article in Welsh ('a' in English). The form y is used before a consonant, e.g., y ci a welais (the dog that I saw), or between two consonants: e.g., gwelais y ci (I saw the dog). The form yr is used before a vowel (and h), e.g., yr afal a fwytaodd hi (the apple that she ate), yr harbwr a adawon nhw (the harbour that they left), and between a consonant and a vowel (or h) e.g., bwyteuoch yr orenau (they ate the oranges), pryniff Sion yr halen (Siôn will buy the salt). The form 'r  is used after a vowel, e.g. y teledu a'r radio (the television and the radio), dygodd e'r arian (he took the money), gwelan ni'r haul (they will see the sun).

What are the Celtic languages and is Welsh really one of them?

It has been suggested that a hypothetical 'Proto-Celtic' language (which would have been part of the  Indo-European language family) was spoken across Europe (including Britain) and into Asia Minor at least as long ago as the late Bronze Age (1,200 BCE). The term 'Celtic' is itself borrowed from the classical Greek noun 'Celtoí' used to describe the people in these geographical regions. The first recorded use is in a work by Hecataeus of Miletus, from the 6th century BCE, describing people living near modern Marseille, France. Celtic is usually pronounced 'KEL-tik,' but sometimes the pronunciation 'SEL-tik' is used.

In this picture, geographical separation of speakers in disparate areas meant that 'Proto-Celtic' eventually split into two different sub-families. These families can be described either on geographical grounds as Continental Celtic (the languages originating in continental Europe) or Insular Celtic (the languages originating in the British Isles); or on linguistic grounds as P-Celtic and Q-Celtic (due to the way one type of sound in the parent tongue evolved into distinct sounds in the daughter languages). Since these classification schemes use different criteria, Continental Celtic does not correspond simply either to P-Celtic or to Q-Celtic, and neither does Insular Celtic.

In the British Isles, the Insular Celtic precursor split into two branches: Common Brittonic and a language which eventually became Old Irish and then Middle Irish. Common Brittonic gave rise to Welsh and Cornish (both called Brittonic languages), and Middle Irish gave rise to Irish, Manx, and Scottish Gaelic (all three grouped together as Goidelic languages). Emigrants from the British Isles to continental Europe took Brittonic languages with them, and these became Breton (a Brittonic language). The indigenous Continental Celtic languages, such as Celtiberian, Galatian and Gaulish, are all now extinct. The Celtic languages have a rich literary tradition, with inscriptions in continental Europe dating back to the 6th century BCE. The earliest poetry from Wales probably originates in the 6th century CE.

Today, four of the Insular languages have relatively large numbers of native speakers, despite being minority languages in the respective countries. These are Cymraeg (pronounced 'come-RAAG') or Welsh in Wales; Breton in France; Gaeilge (pronounced ‘GAIL-gyuh') or Irish (sometimes called Irish Gaelic, pronounced ‘GAY-lick’) in the Republic of Ireland and Northern Ireland; and Gàidhlig (pronounced ‘GAA-lik’), or Scottish Gaelic (pronounced ‘GAL-ick’) in Scotland. Irish is an official language in the Republic of Ireland and in the European Union. Welsh is an official language in Wales, and is the only modern Celtic language which UNESCO does not list as being 'endangered'.

It was estimated in 2010 that about 1.5 million people spoke Celtic languages worldwide. Although Cornish (or Kernowek, pronounced 'kur-NOO-uk') died out in the 18th century, and Manx (or Gaelg / Gailck, pronounced 'geh-lg', or 'gilig'. or 'gilik') became extinct in 1974, revitalisation movements have produced several hundred second-language speakers, and some native speakers of these languages. There are strong efforts towards revival and growth on the part of Welsh, Breton, Irish, and Scottish Gaelic today.

What are popular names for children born in Wales?

According to the Welsh Assembly Government, popular Welsh names for girls are: