Luke Upton, a business journalist and creator of the popular spoof Twitter account @NotGavHenson, introduces his fictionalised new hero of Welsh rugby: a story of Twitter, the media and how a Lion’s bite led to a quick rewrite.

When Wales and Ospreys hooker Scott Baldwin got bitten by a Lion cub whilst in South Africa with his club in September 2017, my first thought was- how on earth did that happen? The second, oh dear, I am going to have to scrap some of last weekend’s work.

This now infamous incident, which led to one of my all time favourite Welsh rugby quotes, from then Ospreys manager Steve Tandy – “There was an incident with a lion, but in fairness it was nothing to do with the lion” – provided plenty of mirth across social media, although less so for Baldwin, who had to miss several games due to the injury.

But for me, writing my rugby satire Absolutely Huge (Y Lolfa), in and around my full time job, family life and a lengthy commute, the nip from little Simba meant some of the recent work had to be scrapped. A little frustrating! In my recently finished Chapter 5, Lion Taming, our hero Gethin ‘Huge’ Hughes is selected to be part of the British and Irish Lions tour to South Africa. Among a tour of disasters, the original version, had one of the squad (lightly) mauled by a Lion on a safari, but Baldwin’s brush with Aslan proved far too close to reality. I didn’t want readers to think I had copied a real life incident- so out it went. But don’t worry, there was still a major incident with another animal, whilst visiting Robben Island, rather than on safari. You’ll have to read the book to find out what that’s about. But it hasn’t been copied in real life. Yet.

So, why all this fuss about animals in a rugby book?

Well, it’s not a normal rugby book. Its origins lie in my love of the sport, the biographies of its stars and being one half of half of the Twitter rugby humour account @NotGavHenson since 2011 (with now over 40,000 followers). Through this time, I have seen the ebb and flow of people’s affections towards players and coaches, and it seems no players or coaches are immune to criticism from keyboard warriors.

A similar rollercoaster in the nation’s affections happens to Gethin Hughes, the hero of Absolutely Huge. After a stunning international debut and glory for club and country, by the age of 20 Huge is the biggest star in Welsh rugby. He’s dating pop star Heledd Harte, the ‘nation’s sweetheart’, and after one particularly heroic moment at Twickenham is voted Second Best Welshman Ever.

But the good times don’t last. He causes a diplomatic row on a Lions tour (that’s the pesky penguin…), makes some calamitous product endorsements, suffers World Cup embarrassment and injury heartbreak and is voted the Second Worst Welshman Ever. Things don’t improve after early retirement at 23, when he gets entangled with both reality TV and a political scandal in Cardiff Bay. The book ends with him tentatively beginning a playing come-back but a long way (professionally, if not figuratively) from where he began.

In writing Absolutely Huge, I wanted, through what I hope is a vein of good hearted satire, to reflect a little of what really influences Welsh rugby now – academies, twitter, crazy media coverage, sponsorships, and celebrity girlfriends. All in a slightly exaggerated fictional Wales – where the regions are the Sailors, Capitols, Borderers, Y Gorau and Criccieth RFC, a pop singer who combines the Mabinogion with R&B rules the charts and an eccentric IT billionaire (normally) gets exactly what he wants.

I’ve been fortunate to have had a great response to the book since it was published in September, and it’s been particularly enjoyable to receive notes from players who have read and liked it, more than one has asked me where the stories have come from. Some pure imagination… others well maybe I’ll talk about that another time!

It’s fundamentally a very silly book, but one that people seem to be liking, A bit of a laugh in a time when they are in short supply! I hope you enjoy it! 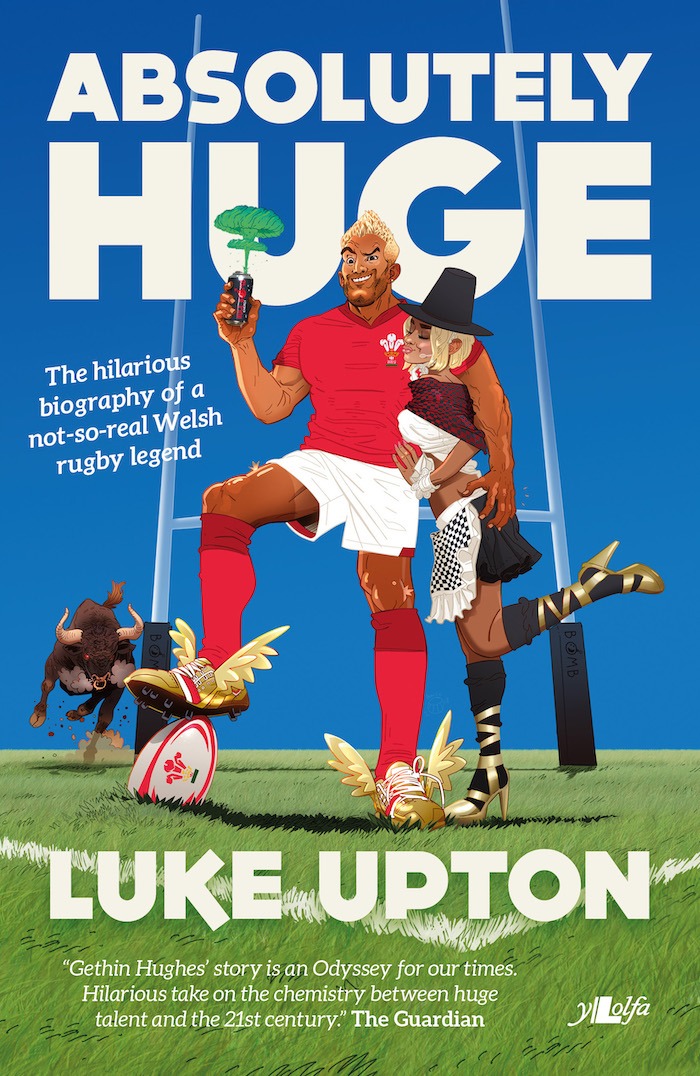 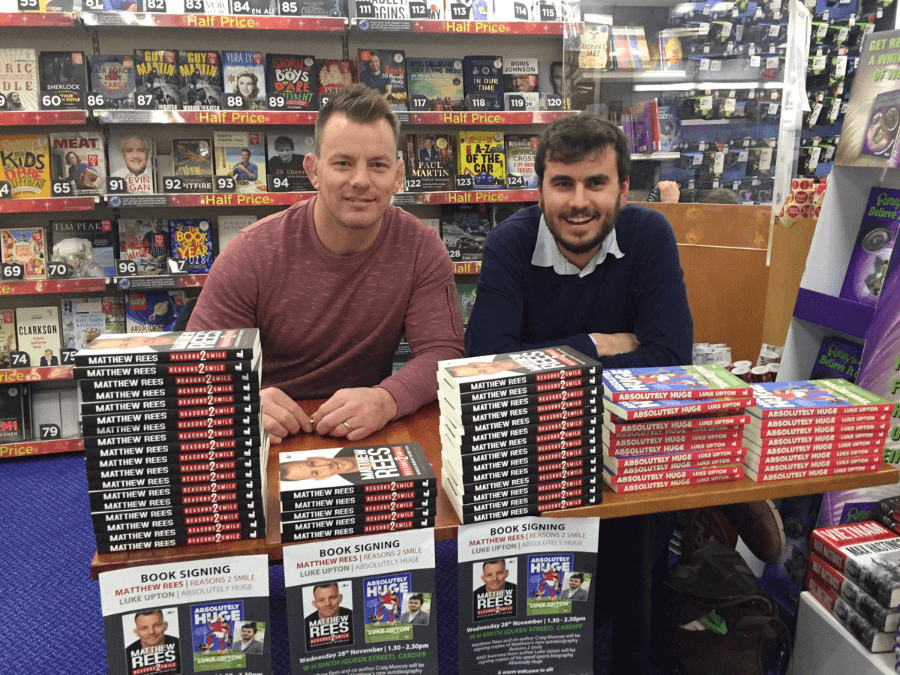 At a book signing with Matthew Rees