A small company in the Netherlands has released an iOS and Google Play word puzzle game, Word Tango. In its first iteration, Word Tango can be played in English, Welsh, Cornish, Danish, Faroese, Icelandic, Dutch and Frysian, with more languages to follow. Parallel.cymru asked the game's designer, Remco Denessen, to talk us through how he went about making the game and why they are supporting lesser-used languages.

I speak Limburgisch (https://en.wikipedia.org/wiki/Limburgish), which is classed as a language, but everyone speaks a dialect, or variant, of that language- so each village or town speak a little bit differently. Many have their own dictionary! Every town has thousands of songs in their dialect and most have a local radio station broadcasting in their dialect.

Fewer and fewer people are speaking Limburgish, and that really is a shame. Our dialect is much older than our national Dutch language, but the people from Holland (the western part of the Netherlands) can hardly understand it and sometimes they ridicule it. Maybe Welsh speakers have had similar problems with people from England?

For smaller languages to survive, it is important for them to have enough media available, such as radio programs, magazines and also word games. A word game can also be used to practice the language, which is especially helpful when you are learning it.

That’s why we- my brother and I- decided that we want Word Tango to be available in more than 100 languages, even when there are only a few speakers. Most word games can only be played in English and in a few other world languages, but we want to make a statement: We DO care about all these smaller languages!

We hope that when Word Tango gets successful, other developers may also release their games in more languages.

We are planning to add around 25 Dutch dialects (Limburgisch and others) in February, which will be the first time the Dutch people can play a word game in their dialect. We also hope to add Manx soon and a lot of other European languages and dialects

How did I compile the word list while not being a Welsh speaker? I collected the Welsh words myself on the internet, from different websites. After that I checked the words in two Welsh spell checkers to make sure that they were written correctly, and we had the texts in our game translated by a professional Welsh-English translator.

I know there are some letters in Welsh which are two letters combined, like “ng” but it was not possible to fit two letters on one tile, and it did not look right. So we hope the Welsh people will not be angry with us about our decision not to do this. I guess they also use a standard English keyboard, and may be used to it.

In a few weeks, we will update our app. You will be able to go back to a finished level to look at the words again. And in Kernewek (Cornish) and Welsh you can also see the English translation of the words; for Frysian you will see the Dutch translation. So this might me useful when you are learning the language. We do this only for the smaller, local, languages.

In summary, we are just brothers who are using our spare time to support languages- languages and word puzzle games are our passion. It was a lot of fun to collect all these Welsh words, and to try to guess the meaning. But it was sometimes hard- for example Kernewek is closer to Dutch or Limburgisch. 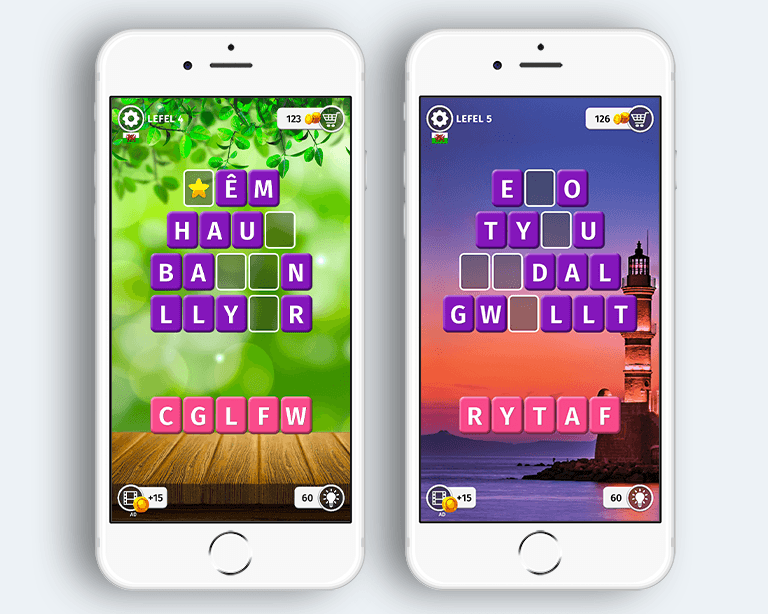